SUBIC, Philippines — From playing bit roles in TV and movies to playing a starring role in the sports world.

The Filipino duo made heads turn and scored a whopping average of 9.59 points in two rounds to reign supreme in the wai kru and mai category.

Meanwhile, the Filipina pair of Iredin Lepatan and Rusha Mae Bayacsan (9.45) narrowly missed a gold in the distaff side topped by a Thai duo with a score of 9.47.

Calica and Gallaza dazzled in the first round with 9.57 points to create a huge separation from three counterparts before shifting to another gear in the second turn for 9.61 points, thus sealing the deal for the country’s first muay thai mint.

Grace and finesse are in the veins of the experienced artist Calica who has been in the MMA and movie stunt scene for over a decade now. And it proved to be the big edge in their dominant win over the Malaysians and the Indonesians.

The Malaysian pair of Hatem Rumijam and Mohamad Ismail (9.21) and Indonesian tandem of Muhammad Sudirman and Lorens Walun (8.84) settled for the silver and bronze medal, respectively.

“I think aside from power and technique execution, we impressed the judges by our tricks and stunts,” said Calica, a stuntman in many action movies since his last SEAG stint 18 years ago.

Though one of the first products of Muay Thai Association of the Philippines’ foundation in 1999, the Baguio City native won an initial SEAG gold medal in wushu in 2001.

After the 2001 KL Games, Calica appeared on popular TV shows like Asian Treasures, Totoy Bato and Kung Fu Kids. He also made it to the big screen with stunt services for movies including 10,000 Hours and Enteng Kabisote.

At 37, Calica was actually a retired athlete already but he couldn’t say no to a call to serve the flag once again. Together with Gallaza who is also an MMA veteran but a first-timer in international stage, they responded in style.

“It’s hard not to answer the country’s call. I had no hesitation in coming back to the national team and it paid off with this gold. Let’s see, I hope I can still do it in many international tournaments to come,” he said. 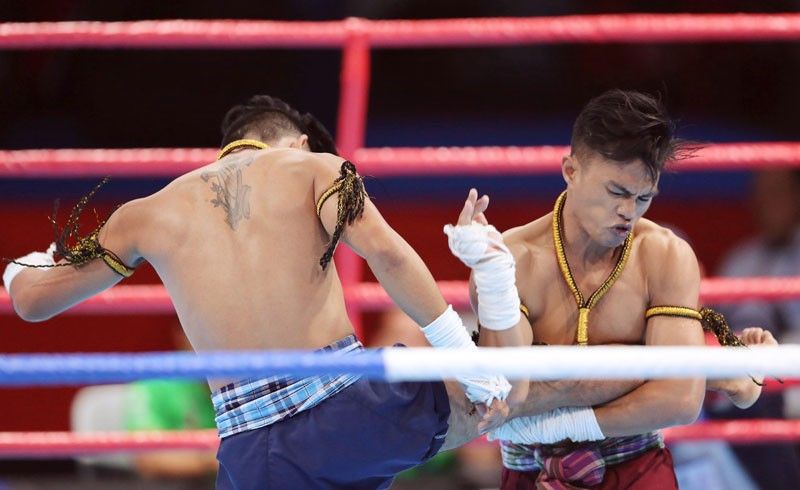